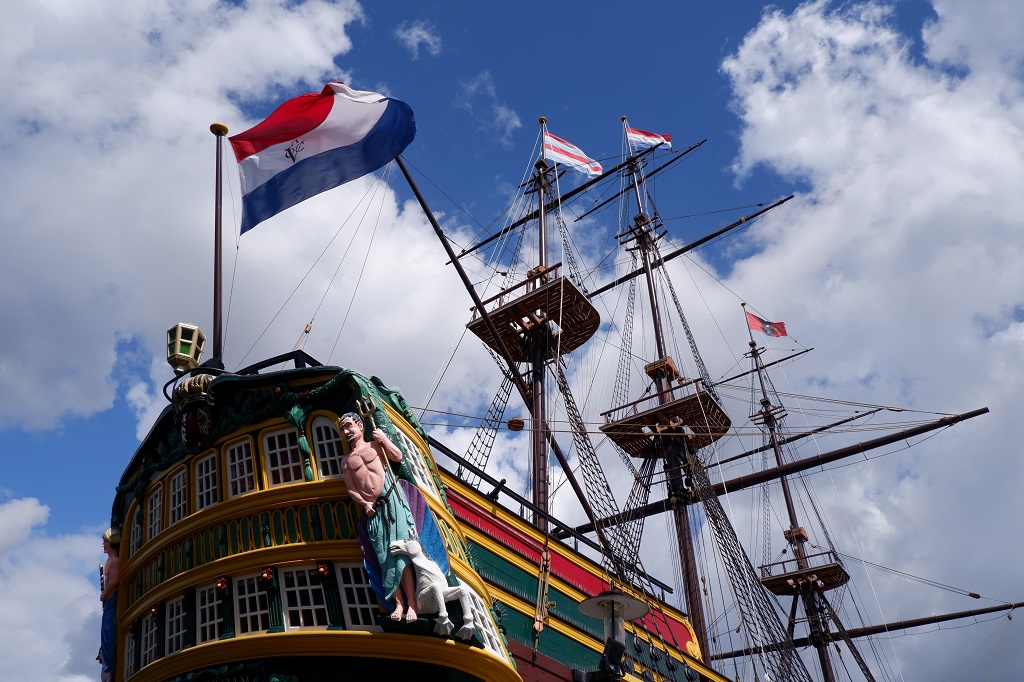 I heard for the first time there was a Dutch Settlement by the VOC in Taiwan in the 17th Century when I went to travel to the city of Tainain in the South of Taiwan. We went to have a look at the An-ping fort (remains of fort Zeelandia) and to Fort Provintia. There were also stories about rumors there were still Dutch ships buried deep in the Amazon like mangroves near Tainan. I wondered what the history of Dutch Formosa was and how it influenced the history of Taiwan. I would like to share this story with you.

In 1564, just after the Portuguese, the Spaniards arrived in what now is called the Philippines. In 1571 Spaniards occupied and colonized Luzon to establish a trade base. In 1598 recognizing the importance of Taiwan laying between Japan and the Philippines the Spaniards sent 2 ships and 200 soldiers to occupy Taiwan. Due to a closing Typhoon they returned without success.

In the 16th century the kingdom of the Spanish king Fillips II stretched from Spain all the way to the Netherlands. As there was a religious division between the catholic Spain and the protestant cities, as the Dutch cities became richer they, under the lead of Stadtholder Willem of Orange, started a war for independence. This war, now referred to as “the 80 year war” lasted from 1568 and ended 1648.

Amidst of this war for independence in 1602 the Dutch East India company (VOC) was founded. The Dutch government granted them an ‘Octrooi’ (or permit) to perform trade between Kaap de good hope (South Africa) and the street of Magellan (chili). But only on the condition they would impair the Spanish and Portuguese Empire as much as they could. This basically would give the VOC freedom to attack Spanish and Portuguese ships and conquer their trade outposts for own benefit.

The year 1601: VOC first attempt to open Chinese trading
Two merchant ships were sent from Batavia (Indonesia) to the Ming Court in south China. The tried to negotiate the lease of a trading base on the Chinese coast. Their request was denied by the Ming and they returned without success.

The year 1603: 2nd attempt to open trade with China
In 1603 the Dutch admiral Wybrandt van Waerwijck sent two ships to the coast of China to try and negotiate with the Ming Court to open up trade. When this was denied again they decided to try it with force by obtaining the settlement of Macau, located at the Chinese coast, from the Portuguese.

The year 1604: Attempt to conquer Macau from the Portuguese and first occupation of Penghu.
The Portuguese had the Monopoly on trade of Chinese porcelain and Silk therefore the Dutch wanted to take Macau so they could take over this position. In July 1604 they attacked the city but failed to conquer the town. In August 1604 the leading officer retreated to the Island of Penghu, officially to seek cover for a storm, however the plan was to first occupy and build a fort and base on Penghu and then start negotiations with the Ming court again to open trade. While construction of a castle started the trade negotiations with the Fujian local government were immediately rejected. They were ordered by the Chinese to leave the island. 131 days after landing on Penghu they left the island.

Why did the Dutch wanted a trade outpost on or nearby the Chinese coast?
In the year 1620 The Dutch east India Headquarters instructed the governor of the East India Company to conquer China or find a suitable location for a trade outpost. Xiao Liuqiu (or Taiwan) was mentioned as suitable location. They saw huge benefits of trade with China via sea as it was much more profitable than using the silk road, the land route through central Asia and the Arab countries.
The reason it was more profitable was that they could directly buy from Chinese producers, removing the middle traders. Also a ship could carry much more than camels or trade carts over land.

The year 1622: second attack on Macau and Dutch arrival at the Pescadores islands
In June 1622 a combined British-Dutch fleet of 12 ships and 1,024 soldiers arrived near Macau. The governor of Macau, knowing he was outnumbered knew the fleet was coming and carried out a landing battle. 136 Dutch attackers were killed. Turrets at the port of Macau also Sunk one Dutch ship.

Regardless of the losses of the Dutch, the English believed that the Dutch leaked military information and refused to work together with the Dutch Army. The English left taking 4 of their warships. After that the Dutch admiral knowing he had failed to take over Macau even with an advanced Naval army was scared to return to the VOC headquarter emptyhanded. He decided he would, just like 18 years before, occupy the unguarded Penghu Islands and try to make a base there.

On July 1622, with the remaining 7 warships and 900 soldiers the Dutch made it ashore looting and capturing 4,000 Chinese locals as slave laborers. With help of these slaves construction of a fortress started in August 1622, just after 3 months in November it was completed. It came at a cost: over 1,300 enslaved people died during construction.

Were the VOC and the Dutch traders good to the locals?
No, life of locals was only to value as labor force to the Dutch army, there were no ethics except for business interest as can be seen in the example of building the fort. Another example: records also show that after the fort and city was built at Penghu the rest of the slaves were brought to Batavia to be sold. Of the 270 slaves boarding the ship only 137 arrived. The others died of abuse or illness.

Once Penghu was occupied the Dutch tried to hinder Spanish trade by blocking Chinese ships from Manila near the Fujian coast. If they could control the Taiwan strait they could benefit hugely. When the Ming Court found out they were afraid Dutch control would soon reach the mainland and thus they ordered an army to expel the Dutch from Penghu. In 1623 with an army of 2,000 soldiers they tried to land on Penghu island, however the Dutch navy was to strong so they couldn’t land. As the Ming navy was not strong enough the Ming Dynasty needed help.

With the help of trader/pirate Zheng Zhilong (known as Iquan by the Dutch and the father of Koxinga) who was able to raise a large navy they together in 1624 attacked Penghu. Zheng Zhilong could not defeat the Dutch ships but was strong enough to contain them and keep them busy while the Ming army landed on the other side of the island. The Dutch, now under pressure from both sides, drew back into their fort.

The Ming seeing it could become a long and costly siege did a proposal to the Dutch: If the Dutch left the Penghu islands and destroyed their fort in return-

The Dutch Leader accepted these terms if the Navy of Zheng Zhilong would retreat. And so it happened.

I found an interesting description of the Penghu islands written in 1629. In this article you can read more about it.

The year 1624: Dutch arrival at the south-east coast of Formosa.
The Dutch arrived at a sandy peninsula called Tayouan. The first thing they did was a construction a temporary defensive fort and city. Which acted as a base from which they would manage operation. After a few years this temporary fort would be replaced by a stronger fort Called Fort Zeelandia.

Due to the location on an peninsula and its lack of nearby fresh water. Most local people and immigrants would settle in the nearby aboriginal village according to Dutch records called Sakam.

1626-1636: gaining control of the island
Common practice of the VOC was to gain control of the aborigines by letting them pledge allegiance with the VOC. In order to convince them expeditions were done inland to punish tribes who had used violence against the Dutch. By doing so they:

Another way of befriendly the locals was by giving them the benefits of trade and protection. The Dutch would buy goods such as deer skin an in return would give them food and security.

The colony was initially built to support trade between Batavia and China and Japan however the Dutch soon realized the island itself was rich of resources.

The 3 pillars of economic activity became:

From mid 1630’s, after having a firm control in the south, the Dutch also pushed to take over northern Taiwan.
in 1635 they took over Tamsui as the Spanish abandoned and destroyed their fort there. In 1642 the Dutch took control of whole of Taiwan when they attacked Keelung and drove out the Spanish.

The years 1650-1653 Rebellions
Due to the ever increasing search for profits the Dutch increased taxes and trade fees but also ordered aboriginals for their woman, more deer pelts and more rice. First the aboriginals rebelled then also the Chinese Han immigrants joined the rebellion. After some fighting the Dutch took back control and decided to construct Fort Provintia in the nearby city of Sakam so they could have a more strict control.

The year 1661 Siege of Fort Zeelandia
Koxinga a Ming Dynasty loyalist saw the Qing was winning the war against the Ming and he decided the island of Taiwan would be the ideal base from which he could continue the war. On April 30th in the year 1661 a naval fleet of 400 ships landed nearby Zeelandia with 25,000 men. Fort Provintia and Fort Zeelandia were under siege, 4 days later on may the 4th Fort Provintia surrendered. It took another 9 months of siege before, due to lack of food and fresh water and no prospect of reinforcements, Fort Zeelandia surrendered too. On February 1 a treaty was signed wherein the the Dutch surrendered the fort and all goods. In return they leftover soldiers and civilians were free to leave by see to Batavia.

1663-1664 The last Dutch attempts to retake the island of Taiwan
A Dutch fleet attempted to retake Fort Zeelandia but failed to do so. In 1664 the same fleet did succeeded in taking back Keelung and its Fort.

Although in 1664 still 26% of the VOC profits came from their Taiwan operations and Keelung. In the year 1668 due to growing resistance from aboriginal tribes and lack of progress in retaking the island, being a company who had to pursue profits, the VOC made the decision to abandoned Keelung and they left Taiwan for good.

Personal note: I really enjoyed diving into the history of Dutch Formosa and the more I read the more there is to tell. This page is far from complete so if you are interested come back later I think I will continue to expand this page and keep to tell more stories of the time period.

I also found out a lot of written history of that time period comes from the dagregisters of Zeelandia (day register of Fort Zeelandia) which were kept by the Dutch. Although this gives a biased story only from the point of view of the Dutch it is still a valuable resource. On this website you can read the transcripts and translations made by researchers of the dagregisters. If you want to have a look at them yourself here you can find a scanned copy of the actual books. Quite cool don’t you think?