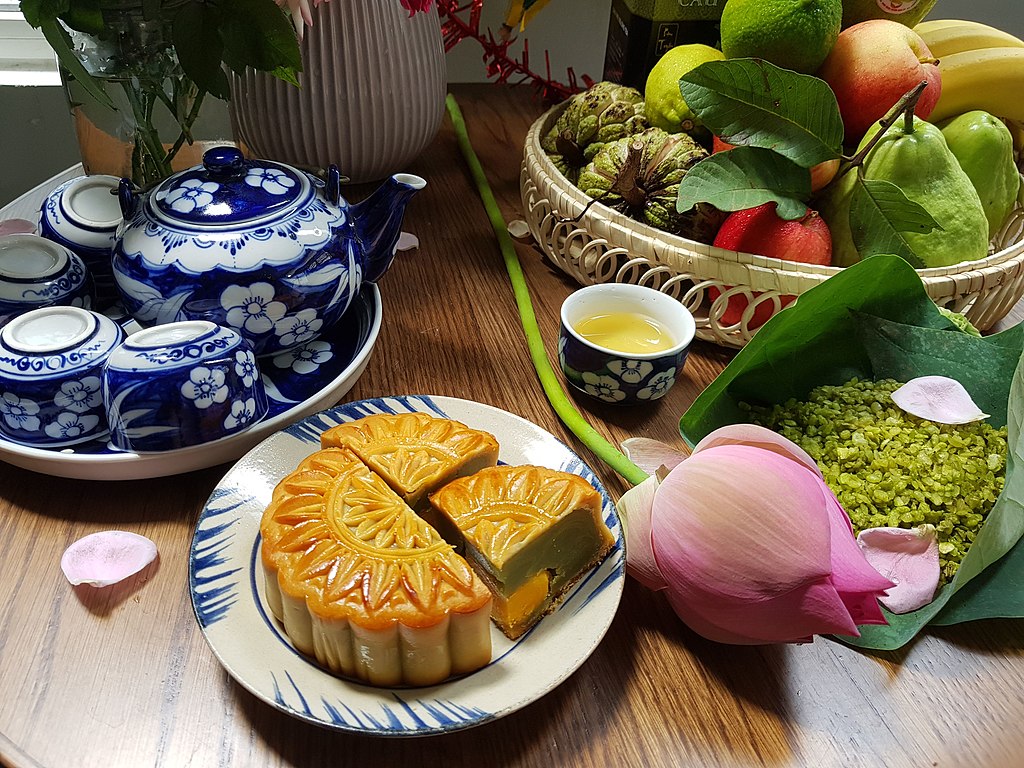 This weekend the mid-autumn festival, also known as moon or mooncake festival is celebrated in Taiwan. It is the 2nd most important celebration after Chinese New year.

Today, I would like to tell you more about this fun celebration.

What is the mid-autumn (mooncake) festival?

The moonfestival is about 3,000 years old. In mid autumn, when the moon shines at its brightest and together with harvest time the festival is held to lead the chinese people into prosperity and good fortune.

In Taiwan the Mid-Autumn festival, also referred to as Moon festival is all about being together with family, eat mooncakes and enjoy the full moon.

There are several stories about the origins of the festival which I will talk about later.

When is the mid-autumn festival celebrated?

The festival is celebrated during full moon on the 15th day of the 8th month on the lunar calendar.

In which countries is the mid-autumn festival celebrated?

Originated from China the mid-autumn festival has spread all around south east asia and now is celebrated in China, Taiwan, Korea, Vietnam, Hong Kong and Japan.

Historical background of the mid-autumn festival

The legend of Chang’e

A long time ago, 10 suns had risen into the skies and scorched the earth. Life was hard to the people. Then Hou Yi, a Chinese archer shot down 9 suns. leaving just one. The last sun begged for mercy and Hou yi let him in the sky. As a thanks for saving earth Hou-yi got 2 elixers for immortallity. He gave it to his beautifull wive Chang’e for save keeping.

However later when Hou-yi was out for hunting. His apprentice came into his house and tried to force Chang’e to handover the elixers.

Instead she took both and flew up towards the heavens. As she wanted to stay near to her husband she decided to live in a palace on the moon.

When Hou-yi found out what happened he felt guilty and offered fruits and cakes which Chang’e loved before he ended his own life.

Other versions of the story are that on the 15th day of the 8th month when the moon shines brightest he shows all kinds of foods and cakes in the hope he and his wife will be united again.

The legende of the jade rabbit

Story goes that 3 immortals reincarnated themselves as 3 poor people…they went begging for food to a fox, a monkey and a rabbit.

The monkey and the fox gave food to the people….the rabbit however did have no food.

Nevertheless the Rabbit jumped into a fire and shouted. “you can eat me!” The immortals were so touched by this gesture of the rabbit that they turned the rabbit into an immortal jade rabbit. Ever since the rabbit stays at the palace of the Chang E on the moon where he cookes a spicemix for the immortallity of the moon.

Can you see him when you look at the moon?

The Chinese rebellion against the Mongol Empire, the start of the Ming Dynasty

Story goes that over 800 years ago at the end of the Yuan dynasty. So that would be around 1279-1368. The Chinese rebels put notes in mooncakes to spread the word on which day they would overthrow the Mongol Yuan dynasty. The up rise succeeded and the Ming dynasty was founded.

There are several ways the Taiwanese people celebrate the mid-autumn festival.

During Mid-autumn festival the people of Taiwan have a National holiday. Expect shopping malls, traffic and scenic spots to be busy.

An important part of the celebration is worshipping the moon and especially the moon goddes Chang’e.

Praying to this deity and burning of incense helps for luck and safety.

Most common way of celebrating mid-autumn festival is by buying mooncakes and eat it together with family and friends often in combination with a cup of tea or coffee.

Mooncakes are round (full)-moonshaped cakes with an outer layer of cake with delicious filling inside. Traditionally mooncake has lotus seed paste as filling but nowadays mooncakes with all kind of fillings are being sold.

Every bakery and city has its own specialty and every person has is own favorite.

Other events during mid-autumn festival

Often dragondances are displayed during the mid autum weekend.

People also hang lampoons and lanternlights around their house to guide the path to prosperity and hapiness.

During Moonfestival the people want to enjoy the moonlight. And how can this be done best other than having a bbq together?! Often local government will open up the parks in the cities all around Taiwan so people can enjoy bbq and evening walks in the park. You also often will see families and friends gather together and bbq on the streets. Yumm….!!!

In Holland the mid autumn festival is a rather unknown festival nevertheless there are ways we can celebrate it. Most asian stores sell the mooncakes starting a couple weeks before the celebrations and if there is no store nearby then online there are quite some good recipes for baking your own mooncake!

Also upcoming weekend a bright sky and mild temperatures are expected so we can also enjoy the full moon on a evening stroll!

If you know a good mooncake recipe or want to share your way of celebrating mid-autumn festival in the Netherlands please share it in the comments below! Read here more about other festivals and celebrations in Taiwan.