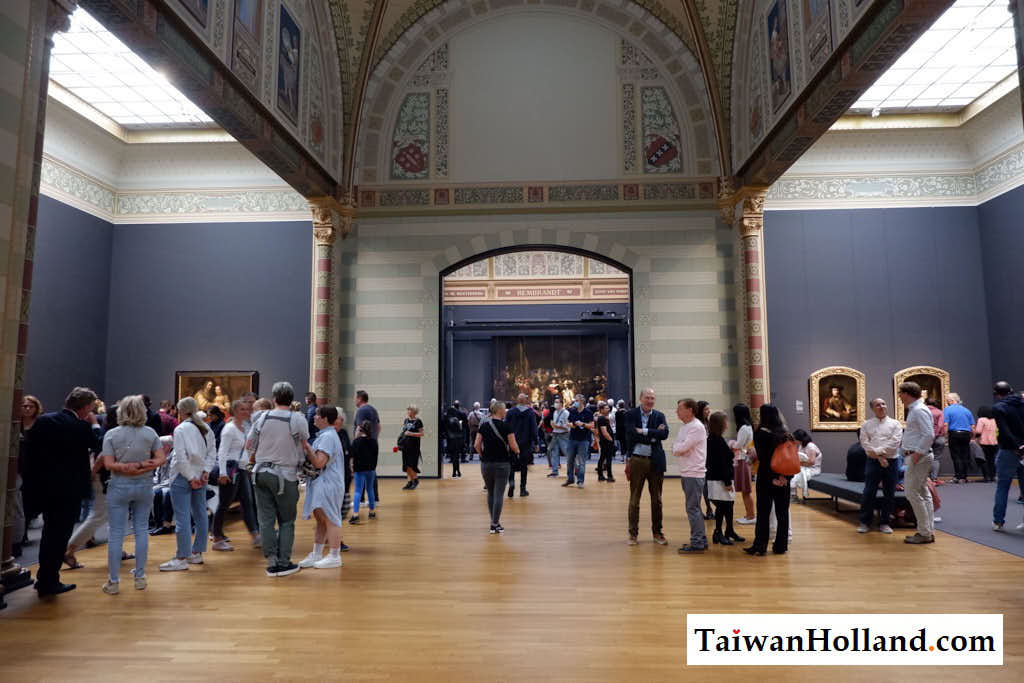 The rijks museum is located at the head of the museumsquare (Dutch:museumplein). Next to the Museumsquare there are 3 big museums located: The rijksmuseum, the van Gogh Museum and the Stedelijk Museum (museum of modern and contemporary art).

In front of the entrance of the rijksmuseum (where used to be the IAMSTERDAM sign) is a large rectangular pond going towards a large grass field (the museumsquare). In the summer lots of locals and tourists hangout there with food and drinks relaxing in the sun.

What is the Rijksmuseum?

The Rijksmuseum is the National museum of the Netherlands. It tells the story of the Dutch history through objects and paintings. Among the objects are paintings of world renown painters such as Vermeer, Van Gogh and Rembrandt.

History of the Rijksmuseum

The current building which hosts the Rijksmuseum was built in 1876 and officially opened in 1885. It was designed by the architect Pierre Cuypers. Its design is both historic, gothic and renaissance. Inside there are several Halls and also an old library which still is intact and can be visited. Outside there are the museumgardens.

Over the years it is renovated a couple of times, also additional wings are added to create more space. Among them the asian pavilion. The last big renovation was in 2003-2013 and spanned 10 years. It was thoroughly modernized and parts of the interior was brought back to its original 1885 style.

Things to do at the Rijksmuseum

The rijksmuseum has a very clear floorplan. Dividing up dutch history in several exhibitions. Each exhibition spanning a certain timeperiod. Next to that there is the Gallery hall on the second floor showcasing world-famous paintings. Also on the ground floor there is room for temporarily special exhibitions.

The special collections are located on the ground floor of the Museum and consists of ship models, a historical gun collection and a collection of 17th century collectables such as chinaware and silver objects. All three are quite beautiful and interesting to see.

The gun collection shows a large range of muskets and guns from the 17th -18th century. Some guns were for warfare others decorative or for hunting. There is even a hunting gun of 2 meters! Can you imagine carrying that around on a hunting trip?!

There is also a large collection of pistols and other weapons such as rapiers and swords.

The last part consists of items which were very popular in the 17th century and therefor seen as collectibles. I liked these very much as it shows what people used to collect. For example, The silver objects: tiny silver figurines of all sorts and kind.

But also chinaware was very popular in the 17th century, when travelers from the far east brought back chinese Porcelain for the first time the europeans didnt knew this kind of material and everyone wanted it. The chinese tried to keep the art of porcelain a secret but soon europeans started to copy the pottery and designs. Some companies did this so good they got famous too. For example Delft Porcelain.

A full room showcases both european as wel as Asian porcelain.

The gallery of Honor shows the very best of the best. Its on the 2nd floor in the center of the building. It is a big hallway, the ceiling covered in painted tiles, with on both sides the paintings of the most famous dutch painters.. The hallway leads to the museums centerpiece: Rembrandt’s ‘The Night Watch ‘ (or in Dutch: “De Nachtwacht”). An enormous painting of a staggering 3,5 by 4,3 meters! Drawn by the Dutch masterpainter Rembrandt

Currently they are restoring the Nachtwacht. Carefully the painting is being studied and layers of dirt accumulated over the years are removed. Showing details which have been long hidden.

One of the Paintings on the side hallways of the gallery of Honor is one of the rare selfportrets Rembrandt has made.

Another world famous painting in the Gallery of Honor is ‘het melkmeisje‘ or ‘the milkmaid‘ by Johannes Vermeer (1660).

In the 17th century trade and seafaring brought much wealth to the just established Dutch Republic. No wonder that some of the most popular scenes where that of sailing ships in the harbor or sailing the seas.

The Dutch painter van der velde II came from a family of painters andwas so skilled he could make paintings with photographic realism. Below one of his paintings showing ships at bay.

This collection consists of mostly church- or Christian objects of the late medieval period. The objects are plaquetes and paintings, but also small statues and objects from the Italian renaissance. It was common in that timeperiod not to sign the paintings, especially for objects made for church. So most objects from are from anonymous artists.

The early 17th century time period was a time of war as the Dutch waged an 80 year war against the Spanish empire to gain their independence. It was also during this time period that the Dutch became a sea power and started trade in the far east and the Americas.

The collection consists of paintings many depicting sea battles but also the merchant traders and important political figures but also objects, cabinets, weapons etc. from the time.

The second half of the 17th century the Dutch republic gained independence and was flourishing. The competition for trade and colonies resulted in war with the British. There were in total 3 Anglo-Dutch wars of which the first was lost by the Dutch and the 2nd and third where won.

One notable event from the 2nd Anglo-Dutch war was the raid of Chatham: In a bold move Dutch Hero and Admiral Michiel the Ruyter sailed up the river Medway to Chatham where they destroyed docked ships of the British Navy and even managed to steal their flag ship, the HMS Royal Charles.

The ship was deconstructed however the wooden carving on the stern was kept and now can be found on display in the Rijksmuseum.

In the 18th century the Dutch navy was not as powerfull anymore as in its haydays however the Dutch still had its trade and its colonies. This exhibitions is about the colonies and its trade outposts. On the walls maps and pictures of trade settlements are shown.

For centuries the Dutch where the only allowed European trade partner of Japan. A special room is dedicated to the trade outpost of Deshima, which the Dutch had in Japan.

In the early 1800’s Napoleon conquered most of Europe including the Netherlands and for several years it was part of the French empire. After the defeat of Napoleon, King willem I became ruler of the Netherlands.

The most famous Dutch artist of the late 18th Century is Vincent van Gogh, although he led a poor and depressing life, eventually killing himself at age 37. After his dead this post-impressionist painter became one of the most famous painters of the world. His painting selling for millions. His expressive way of painting with vivid colours and brush strokes layed the foundations for modern art.

The Rijksmuseum has several Van Gogh paintings, some of his early work, a self-portrait, and some of his later work. If you wish to see more paintings of Van Gogh also on the Museum square, just next to the Rijksmuseum, lies the Van Gogh Museum where you can see his most famous work and learn more about his life.

The top floor of the Rijksmuseum has two sections, one spanning from 1900 to 1950. The other 1950-2000. It is a somewhat smaller and also a less popular area of the museum. Nevertheless there are some interesting things to see. For example Mondriaan and Karel Appel Paintings, design furniture from the famous Dutch designer Rietveld, but also a complete early 20 century plane!

The Rijksmuseum also has an Asian collection. On the ground floor you can take the hallway to a separate section of the building where objects are displayed. At the time I visited there was an exhibition with Chinese statues and Japanese scrolls.

In addition to the Japanese collection there was another temporarily exhibition by a Taiwanese artist!

What a coincidence and quite cool!

Is the Rijksmuseum worth a visit?

I believe you should visit the Rijksmuseum if you go to Amsterdam.

How much time to schedule for a visit to the Rijksmuseum?

4-5 Hours for a full visit. A bit longer if you also take the audio-tour and listen to all items.

If you haven’t got too much time to see everything then below I made a summary for you of which Exhibitions you should try to see and which ones you should skip. Of course I realise that everybody has different opinions and interests so my selection is based on personal opinion (did I enjoy it?), uniqueness, (can it be seen anywhere else in the world?) and Fame (is the exhibition or are the items displayed famous?). Of course If you have the time I would suggest taking the full museum tour!

The gallery of Honor! Definitely! Also the galleries of the year 1600-1700 are very much worth to have a look. I also very much liked the model ships and collectibles on the ground floor. The paintings of the famous Dutch painters are beautiful and yes, you will also find some gems from the lesser known painters. I also liked the exhibition about the Dutch colonies, objects from the VOC and the far east.

Most of the time there is a temporarily exhibition. Depending on the topic, if it interest you or not. you can decide to skip it. The top floor has modern art. Although there are some objects of famous artists such as Mondriaan and Rietveld I personally felt this exhibition was less interesting maybe because there is a build up to the gallery of honor, and afterwards the rest is just less interesting…I dont know exactly why.

Personally I feel you should have a look the whole museum as all its collection is worth a visit. If I had to say one exhibition to skip then personally I would suggest skipping the early medieval collection 1100-1600 as it consists mostly of church objects and early roman objects. I just felt those were less interesting than the objects of the 17th century. If you do are interested in medieval and more ancient history then I would suggest you to have a visit to the National Museum of Antiquities in Leiden.

How to get to the Rijksmuseum

Click here to see the location in google maps so you can plan your own route.

Opening hours of the Rijksmuseum:

The museum is accessible without a compulsory route. Try keep the social distance of 1.5m distance to each other. A facemask is not mandatory but if you wish you may wear one.

Admission fee of the Rijksmuseum:

The museum is accesible for people with disabilities. The Museum is accessible for wheelchairs or with mobility scooters. You can even borrow a wheelchair, rollator or pushchair. The floorplan shows the lifts, disabled toilets and seating areas in the museum.

There are also special tours for visitors which are partially sighted, blind, deaf or with sensory sensitivity. Read here more.