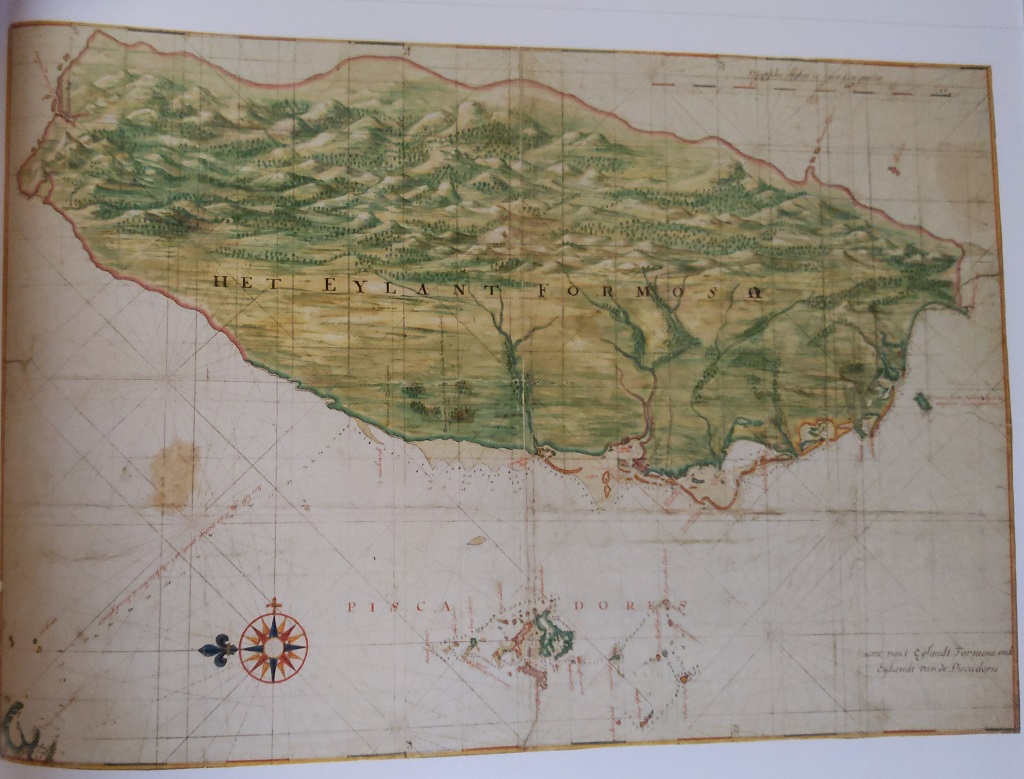 This is an ongoing project of mine. I collect historical maps of Taiwan. Maps can tell the history of a place through the years. Interesting features and descriptions put on a map can sometimes be connected to written records of a time period. Sometimes in Modern day there are even traces of the past left to see!

I am collecting all kind of maps, whenever I find an interesting historical map of Taiwan and I feel there is an interesting story to tell I will add it. So please come back and check out again in the future to see if there are any changes!

In the sixteen and seventeenth century Cartography an mapmaking was an art. However it was impossible for the makers to travel the world. Instead Cartographers collected maps and eyewitness records and used these as basis for their maps. Because cartographers often used same sources and records many of the old maps contain mistakes or were not very detailed in some parts.

The dutch VOC therefore hired people with the purpose collecting maps from all over the world to bring them back to one place so cartographers could make correct maps for their voyages.

I know that there will be many differences and also over the last centuries the country and coastlines have changed drastically but just as a reference I added a modern satellite image of Taiwan so you can compare it with the historical maps.

Background info
Gerard Kremer (Mercator) grew up in Flanders. He was a cartographer and also made globes. He started to draw maps around 1547. In 1552 he moved to the city of Duisburg in Germany. It was in Duisburg where he published an 18-sheet world map in 1569 with his own developed so Mercator projection.

In 1602 a combined 3-volume piece was published and in 1604 his other son acquired the plates and they published more editions until 1633.

What do we see on the map?
I enlarged the southeast asia part of the worldmap. We see in the middle of the map a large ship, in the north we see the coastline of China, In the middle we see the philipines and in the right top corner we see the text I.Formosa e.g. island of Formosa (Taiwan). In that timeperiod Taiwan was still depicted as 3 different islands. This probably comes from the description of Portugese sailors. They must have mistaken a bay, inlet or river to describe it as three islands or something. As much cartographers used the same maps and eye-witness descriptions as references many mapmakers depicted Taiwan in this way for years until more accurate maps where available. 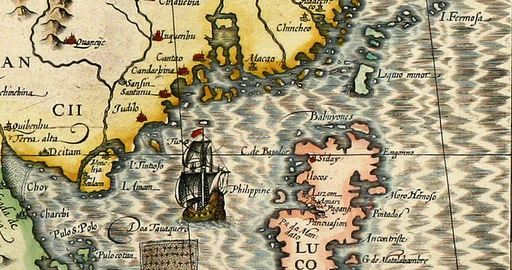 Background info
Johannes Vingboons was a 17th century cartographer. Vingboons was a map maker, but he did not travel himself. He relied on sketches, maps made by merchants, captains, scouts and other travellers. This material was carefully collected by the VOC and WIC and brought back to Amsterdam.

Vingboons was one of the top cartographers in the world at the time and worked close with the West- and East india company. He made many maps of places all over the world during the age of exploration.

We see the island of Formosa and the perscadore islands. Some bigger rivers are shown and the mountains are depicted.

It is not very good to see on this picture of the map but the original shows the depths near the coasts of the island which is vital for sailing the area. The coastline on the western Taiwan and de pescadores are very detailed. Although it is possible to use it I would not consider this particular map as a sailing map as the colouring and visualisation of the island is too elaborate.

Background info
This is an unofficial map made by Caspar Schmalkalden. Caspar was Born around the year 1616 in Friedrichroda (central Germany). In his early Career Caspar was a Soldier in service of the Dutch West India Company and served in Dutch Brazil and Chili from 1642-1645.

After serving there in April 1646 Caspar went for a second voyage, this time with the West India Company to Java, Taiwan and Japan.

After staying in Batavia for a while he on April 1648 he boarded the Patientia for Zeeland and after several stops he landed on Formosa 2 months later.

Soon, after several years of serving as a soldier, he turned in his rifle and became a surveyor on the island of Taiwan. For 2 years Caspar worked on mapping the geography and culture of the local area. In the Autumn of 1651 Caspar returned back to Europe.

Caspar Schmalkaldens handwritten travel note book is a Vital resource to understand how life was in that timeperiod. It consists of 489 pages of text and has 128 drawings.

We see the island of Taiwan, called insula Formosa by Caspar. The north of the island is pointed towards the left of the map. The shorelines are very detailed especially near fort Zeelandia. But also on the east side there was some exploration done.

When we have a close up look at the north we see Tamsui (Tamsuij) and Keelung (Quilang) are mentioned on the map together with the Cabelang valley (Kavalan area).

There is no legend but it seems that villages are depicted with red dots.

The deeper we go inland the less detailed the drawing becomes. The mountains are drawn in the middle of the country. One mountain named in particular: The tafelberg.

Background info
This map is an early 18th century (1705) map of western Taiwan and the Penghu islands.

Using the technique of Copper engraving multiple copies of this map were published. Some of them were painted in colour afterwards.

We see the western Taiwan, again with the coastline and penghu islands. Also this map contains the depths of the waters near the coast. The central part of the island is less detailed however it does show the contours of the mountains. Some distinct mountains with their names are displayed. I can only assume these were used for recognition during navigation.

Background info
William Campbell (1841-1921) was a scottish Presbyterian missionary in Taiwan during the Qing-era. He has multiple works on his name. Several articles about missionary succes in Taiwan, he wrote appendices on previous historic works about Taiwan. He wrote for (scottish) journals and magazines. But he also worked on a piece called”The island of Formosa: its Past and Future” including an updated map of the island of Taiwan. This is the map we see below.

This map is when the Japanese just took over control of the island. The capital is still Tainan. In the north we see the city of Tai-pak, which is current day Taipei. We can see the island is divided into 4 prefectures:

The map uses a mix of english, chinese and local hokkien language names of places and cities.
What also is interesting is that areas of where some of the tribe lived are on the map.

The maps in the previous chapter where maps drawn by European explorers. However there are also historical maps which are made in China, Korea, Japan or other asian countries. These are for me more difficult to find as they are mostly written in local language and most older maps seem to have a kind of schematic layout. This not only makes it more difficult for me to find them but also to comprehend them.

Background info
During the Japanese colonial timeperiod the Japanese undertook large infrastructural projects in Taiwan. Railroads and roads where built to interconnect cities. As well as geological research was done to see where precious minerals and resources were to be found. This travel maps shows the main travel routes.

This map is a more modern day map of Taiwan. It is a travel map made during Japanese colonial time. It shows the main roads and railroad routes as well as the water connections and ports.

2 thoughts on “Historical maps of Taiwan”