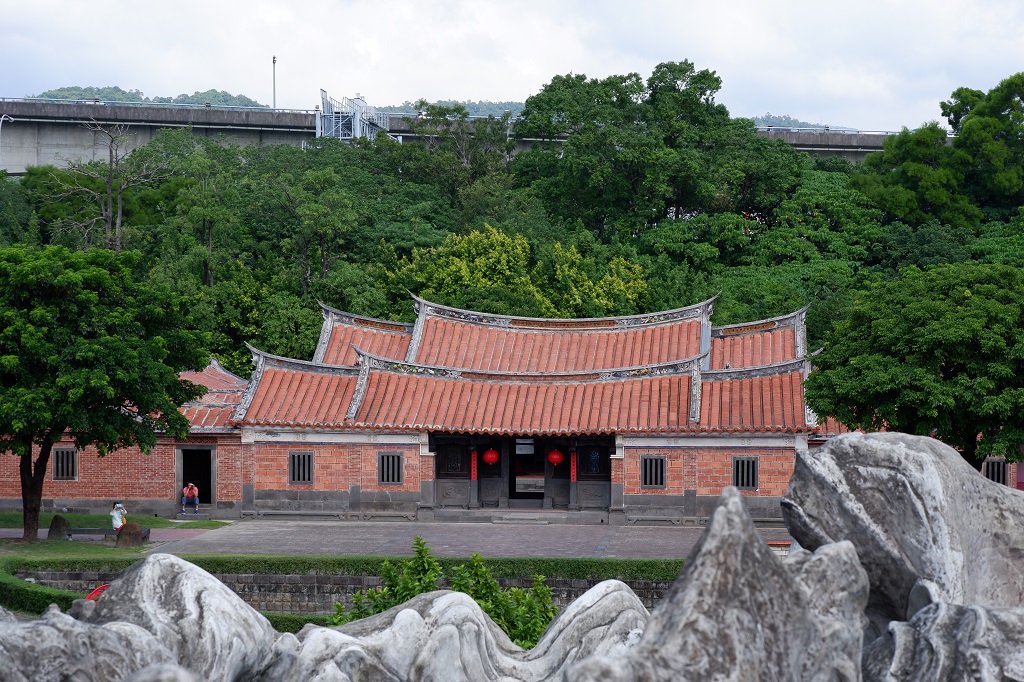 In Taipei I visited the Lin an Tai Historical house in Northern Taipei next to the Keelung river. It is a red bricked house with Chinese style saddle roof. It has multiple rooms and is surrounded by a beautiful garden with ponds.

As I walked there I wondered myself what traditional houses were like in Taiwan. Are they all like this. Or was this a type of building just for the rich at the time.

I soon found out there is a whole lot more different styles and architectures than I first assumed. This is mainly due to the long history of the island with a lot of different cultures and building styles.

For thousands of years Austronesian tribes lived on the island of Taiwan when in the 16th century Western influences were introduced to the island. After that Qin Dynasty introduced Minnan and Lingnan architecture. Then during the Japanese colonial time the Japanese introduced urban planning and construction of Western-style buildings combined with Japanese influences.

Today I will limit my research to houses from Austronesian architecture (<1600’s), and houses from the Dutch Formosa-the kingdom of Tungning era until the Qin Dynasty (1624 -1895).

I am aware my personal research is far from complete. Also architectural styles and influences are not only seen in houses but also in Temples, government buildings, city layouts and such but that I’ll leave be for another time.

Nevertheless I hope you enjoy reading. The sources I used are stated on the bottom of this page. If you have any comments or interesting information I should add please contact me. I am happy to learn more.

There are 16 officially recognized indigenous tribes living tribes on the island of Taiwan each with different customs, believes and building styles. For some of the tribes I managed to find information about their housing.

What did the tribal houses in Taiwan look like?

The Tsou people lived near Mount Alishan in the western central mountains. They lived in small settlements of three to ten households. Tsou houses had an oval shape with thatched roofs almost reaching to the ground. Bones of animals killed during hunting were put on shelves inside the house. 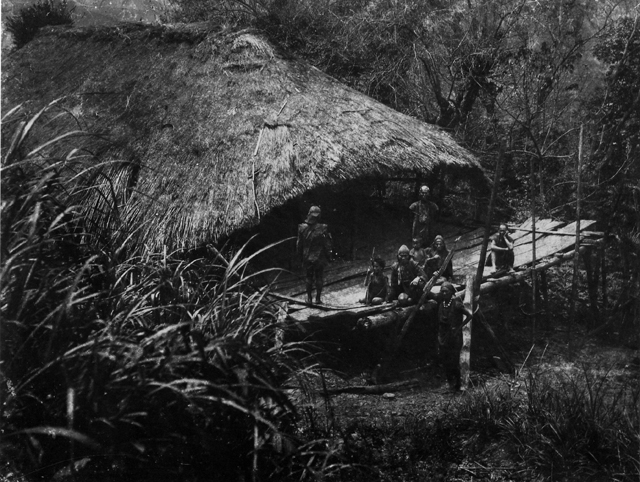 The Atayal Tribe Lived in North- Central Taiwan and lived in isolated huts or settlements in the mountainous areas. They mostly lived in huts sometimes build at height so they are free from the ground.

I found a very detailed step-by-step description (4) of how the Bunun tribe built their homes:
They cleared the land and collected building materials Then first the frame and supporting structure was build and a roof was placed. After that the (non-supporting) outer walls were placed. And last the separate areas of the house were built, such as granary for storing food or a cooking area. At completion of the house a Ceremonial banquet is organized.

What material was used by the Taiwanese tribes to build their houses?

The people living on the island made use of the Natural resources for construction materials. This included straw, wood, bamboo, stones soil and grass. Per tribe there where little differences according to their living area. Some preferred the bamboo and wood. Others stone, stone slates and dirt.

How does the inside of such a Taiwanese tribe’s house look like?

The most detailed description I could find was that of a family house of the Bunun tribe. According to (4) most Bunun houses had a raised sleeping area, a kitchen, granary and a multi-purpose space. The cooking and sleeping area were located in the front side of the house while the granaries and storage spaces were located in the rear of the house.

How many people were living in a single house?

Depending the tribe, one household to up to one whole family with multiple households.

Did the Taiwan tribes had ornaments and decorations in their houses?

The Tsao tribe placed Bones of animals killed during hunting were put on shelves inside the house. Also some of the tribes were headhunters and placed heads of their victims in or around the house kinda creepy don’t you think?
Other than that Ornaments made of stone and shells found ashore were used.

When the Spanish and Dutch arrived to the island of Taiwan they brought their own building styles with them.
The Spanish coming from south Europe prefered to build using ventilated stones while the Dutch were using mainly bricks as building material.

The Dutch used a typical red brick. It was transported as ballast in the bottom of their ships and was brought over from their settlement in Batavia, Indonesia. During the early days they mainly used the bricks to built defensive buildings including fort Zeelandia.

Typical Dutch houses from that time had brick walls, with wooden beams on top to support a saddle roof. A drawing made a carto graphist for use in an atlas of that time period can give some insight on how the houses and streets must have looked like. It is a drawing of the city of Taioan, including on the right side Fort Zeelandia. The exact date is unknown.

The Dutch took their European building style implemented it on Formosa. squared streets with blocks of high houses densely packed next to each other. You can see distinct white houses with red tiled saddle roof. Most likely the red bricks were plastered to make the walls uniform and protected just as was done in the city of Batavia (5) . 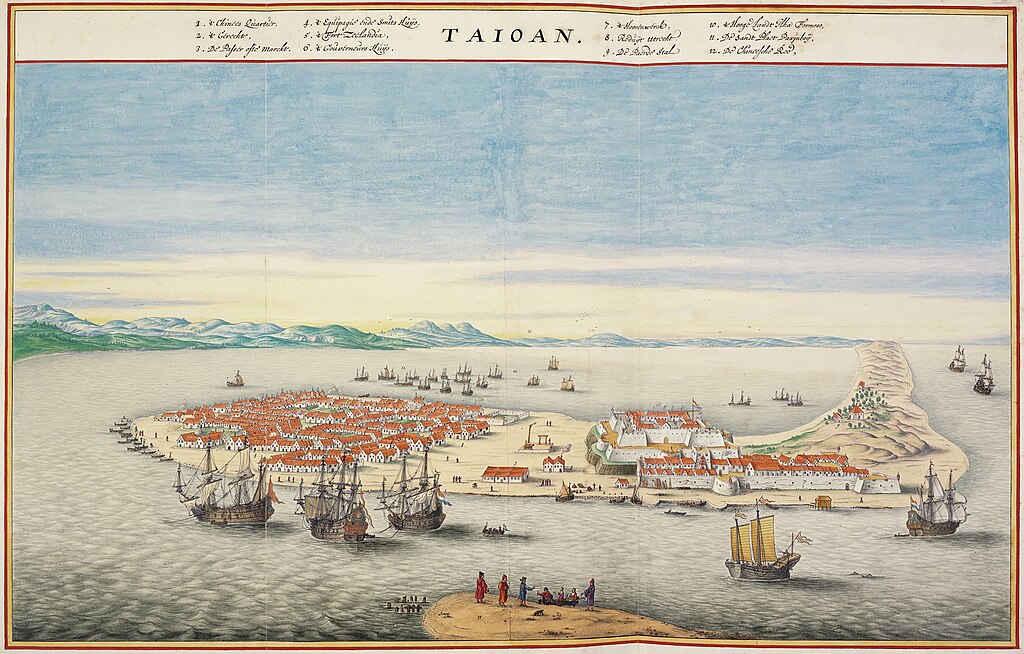 Nowadays there is not much left from the time period, at least not of the housing, however if you go to visit Fort Anping (Zeelandia) you will see remains of the red bricked walls of the fort once constructed by the Dutch.

Also I would suggest to walk down Anping old street. The street is narrow and cramped full of old shops and stalls. But there are many alleyways to explore reminding you of the history of this area. You will even find that some old buildings or walls still have the characteristic red bricks.

What does a traditional Taiwanese house from the Qin Dynasty look like?

What did a Qin dynasty Taiwanese house look like?

There are several types of historical residences:

Siheyuan type residence are found on mainland china and can be found throughout the country. It refers to a courtyard surrounded by buildings on all four sides. The first Siheyuan type building was already mention over 2,000 years ago in the Western Zhou period. In Chinese history this composition was the basis of most buildings. Multiple families were living in the buildings while the courtyards provided extra space. Living conditions in such a building were most often quite poor.

Sanheyuan type residence is a house commonly found in Taiwan and Mainland China. It shape is an inverted U shape. In the middle is a courtyard with on three sides a wing of buildings. The buildings can either be one or two story buildings. The purpose of the main building varies by region but in the side buildings are used for bed rooms, living rooms kitchens, storage and such.

There were 2 distinct roof types used for dwellings in Taiwan: Horseback and Swallowtail. Ordinary people most often had the horseback style while the swallowtail style had sweeping ends and most often was found in official residences and temples. Can you spot which one is which?

What material was used in these traditional Taiwanese houses?

From ancient times the Chinese used blueish (or gray) bricks to construct their houses. When European settlers came the red brick was introduced. From halfway the 19th Century a shift towards using red bricks started. It was commonly thought that red bricks were of higher quality than the traditional blue bricks. Several houses built in the 19th century during the Qin dynasty are made with red bricks and also for example Modern Shanghai was built mostly in bricks from 1843 to the mid-20th century.

Which layout and rooms does a traditional Taiwanese house have?

Most buildings had a central room serving ceremonial needs flanked on either side by a bedroom. Both side wings flanking the courtyard could be both long or short and provided extra rooms for kitchens, toilets, storage or additional bedrooms. Very wealthy Chinese would often surround the house with gardens.

The beds were actually quite small, they were wooden furniture placed above the ground (I think to avoid snakes or rodents). I noticed there were differences between them. One was more luxurious than another with different woods, a mirror and decorations.

The side buildings also had small courtyards were people could meet up.

How many people were living in a Qin dynasty Traditional Taiwanese house?

A house could be lived in by a whole family, that consists of several households. Due to the nature of such a building, if necessary more wings could be placed parallel to the first set in order to expand a building.

What Ornaments and decorations did a Qin dynasty Traditional Taiwanese house have?

Most ornaments and decorations were made out of carved wood. Especially the rich house-owners could afford elaborate decorations. The Lin an Tai house in Taipei has beautiful carved wooden doors. Up close you can see how much work it must have been to create one panel.

There are quite some wonderful traditional houses in Taiwan which you could go to. I wrote an article about where to find historical houses if you wish to visit one on your travels in Taiwan.

Sources: everyculture.com 1 hisour.com 2, linantai.taipei 3 Bunun Dwelling: A Study on the Tectonic Culture of the Aborigines in Taiwan 4 colonial architecture of Indonesia 5 changing technology in brick industry of modern shanghai (6)

Notes: Although I tried my best to do my research as accurate as possible I am just a hobby writer with interest on this topic. If I made any mistakes or wrote down incomplete information please contact me. I am always happy to learn more on the subject!