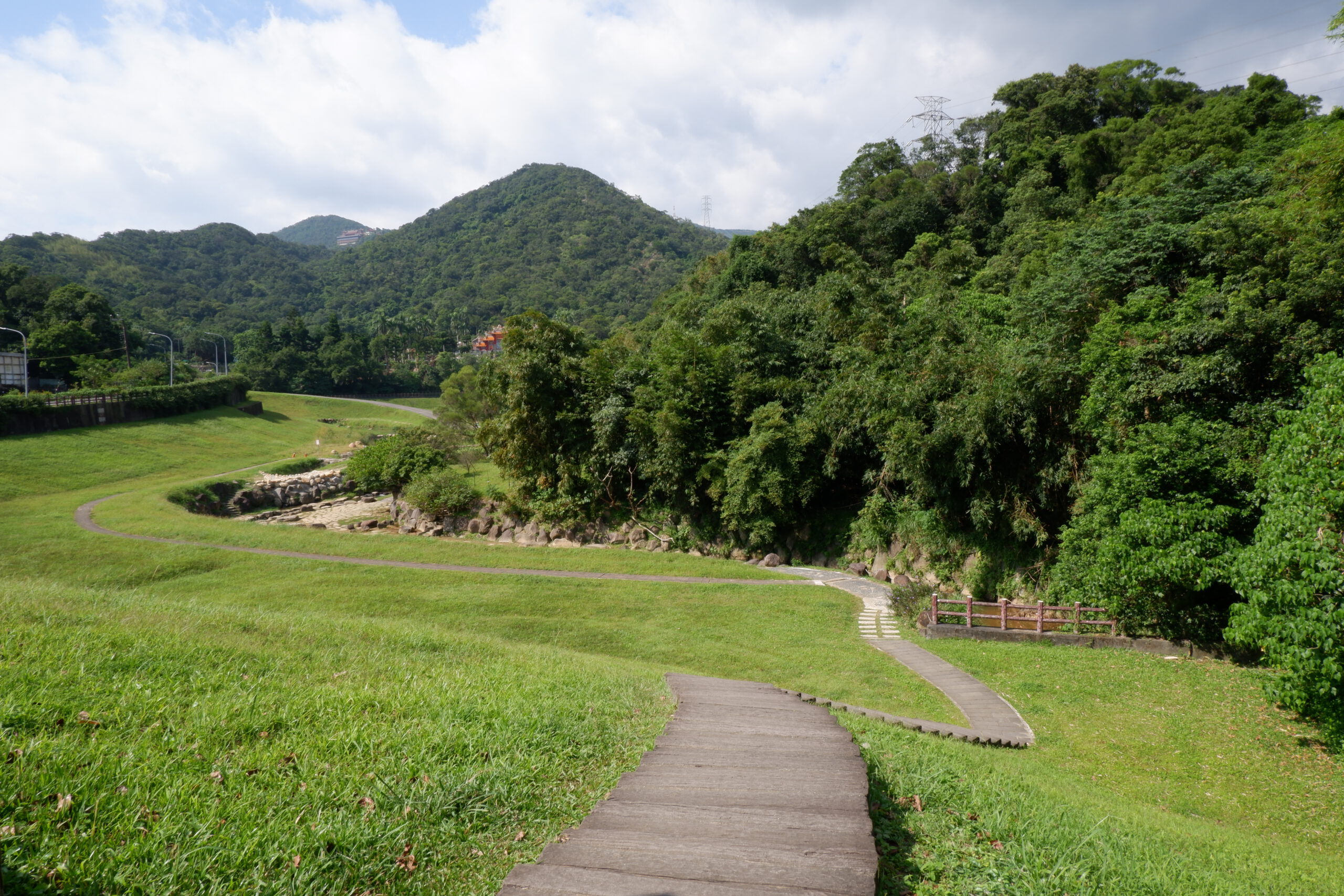 Hiking from Dagouxi Waterfront Park ( 大溝溪生態治水園區 ) to Bishanyan Kaizhang Sheng Wang Temple.
Last year october (2019) I spend 3 weeks in Taiwan. As it was my third time in Taiwan I decided I wanted to do a less known hike. In the north of Taipei, Dagouxi waterfront park seemed a good starting point. First I took the metro from main station to Dahu Park Metro station. From there, following the road, it was a was small walk north to the entrance of Dagouxi waterfront park.

The history of Dagouxi waterfont park
Dagouxi waterfront park is located in Neihu District and opened in 2014, it is both used as water-control function and for recreation.
Before the park openend Dahu Shanzhuang street was flooded almost every time during rainy season or when a typhoon passed by. The Park is designed in such a way that the Dagou stream was preserved but alongside extra space is created so during heavy rainfall peak flows can be reduced.

During flower season many local people come to the park to enjoy a path of flowers which are planted to follow the river. As I was not there in flower season instead of following the path I decided to go down to the stream and walked the Qinshui Trail alongside it, I really enjoying watching the colorful butterflies and bright red dragonflies flying around me while I walked the path.

The Qinshui Trail ends at the entrance of the Wuhzi Mountains. From there several trails are going into the mountains. As I Found out the Yuanjue waterfall was only a small walk away. I decided to have a look there.

Immediately I felt like stepping into another world. The hot sun and bright open space of the park was swapped with cooler air and a forest full of all kinds of greenery as the path kept following the stream up into the mountains. Along the path signs were posted which tell the reader about local wildlife and plants. Yuanjue waterfall is about 800m walk from dagouxi waterfront park, which is about 20 minutes. Its easily walkable with small children or for elderly people.

At the end of the trail was the Yuanjue waterfall which by itself where not so impressive. I guess because it was late summer and lately not too much rain has fallen so there was only a small stream of water. There was a seating area and a flower garden kept by the local people. So I took a break to climb the rocks, take a rest, drink some water and enjoy the scenery.

From there I decided to hike further up the mountain and I got my first glimpse of the view and the Taipei101 tower. The trail ended at Fengbishan Yuanjue Temple, one of the first Buddhist temples in the area, which currently is renovated so I unfortunately could not have a proper look.

I was ready to go back but decided to have a look in the small village up ahead. The village up ahead is part of the Baishihu community which is known for its strawberry farms, the love lake and the couples tree.

When I walked further I met the owner and his son. They were picking fruits from the trees. The owner called Mr. James was very kind, he asked me where I was from and suggested me to follow the road to the suspension bridge cross it and have a look at the temple over there. He even gave me one of his fruit to take back to my hostel.

The Baishihu suspension bridge spans 116m between two mountains and was built so tourist who visited the temple could easily go to the nearby strawberry farms too. I enjoyed the view of the valley from the bridge. The purple color is very nice to make good photos don’t you think?

Bishanyan Kaizhang Sheng Wang temple
When I saw the entrance of the temple I already knew I was going to see something special. A stairs led up to the temple area. The woodcarving, all painted in vibrant colors. Of all of the temples I’ve seen in Taiwan this one is on top of the list.
As a westerner I do not understand any of the stories and do not know the gods depicted by the carvings but I do admire the craftmanship. I think I spend over one hour just looking at all the woodcarvings.

If the amazing woodcarving does not catch your interest then maybe the magnificent view of Taipei City does. This temple is truly one of the gems of Taipei. And I really recommend visiting here. I stayed here until sunset and would like to end with some photos of the amazing view from Bishan Temple.

Hike information, links and tips:
In summer the waterfront park can be very hot and there is not much shade. Protect yourself against the sun.

Total length: 3.8km
Approx. time: 2hr
Difficulty: I would say beginner level as the distance is not far and the path is well paved. At least from the park to the Yuanjue falls is suitable for family with small children.