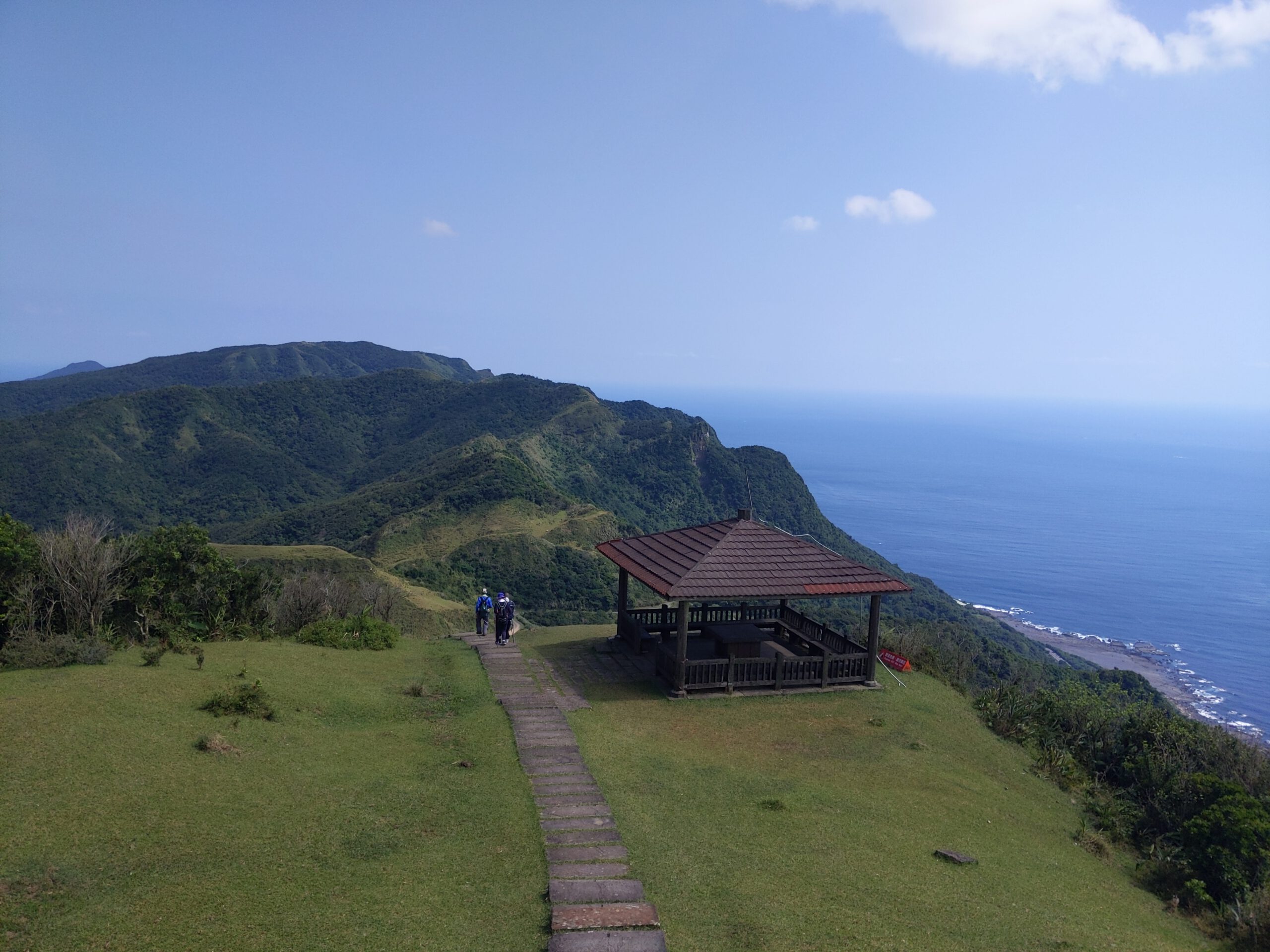 Hiking is one of the best ways to explore the nature of Taiwan and this time I wanted to do a hike I could do in a day and which was in the north of Taiwan. As I was staying in Yilan county for a couple of days I decided I would hike the Caoling Historic Trail from south to North. The trail of about 8.5km starts at Dali train station, first hiking up the steep hills and then goes inland all the way to Yuanwangkeng Riverside Park from there you can walk to Fulong Train station.

History of the Caoling Trail
The Caoling Historic trail is situated in the northern tip of Taiwan. It is part of an ancient route and built by the early Chinese settlers to connect Taipei with the villages on the coast.

Starting point.
The start of the Caoling Historic trail is at the Tiangong Temple (大里天公廟碑林). Just a couple of hundred metres from the Dali Train station. Next to the temple is the Dali visitor Centre where you can buy some drinks and go to the restroom. As I was early (around 8 o’ Clock) to beat the midday heat all was still closed. If I remember correctly it opened at nine in the morning.

The entrance of the trail is easy to find and the signs are clear about how long the walk will be. I always read the danger note carefully, especially in a foreign country and also take a photo of it so I can have another look if necessary.

Hiking to the top
The trail starts on a maintenance road which also goes all the way to the top but soon a sign on the left side shows Caoling Historic Trail and I turn left onto the trail.

Most of the trail is stone paved. Although it was easy to walk on, you do need your eyes on the stairs because the stones are not always even. Especially the round ones. I can imagine them being slippery when wet so also wear good shoes. I was happy on the way up there were several resting points to give my legs some rest and to look around.

After quite a while the trail became less steep and I got a first glimpse of the view. Over the trees I could see ‘ Turtle Island’ laying in the ocean. Can you guess why it is called turtle island?

Ancient Ruins of Lu House (Reed house)
Halfway the way up there are ruins of a tavern from the Ching Dynasty. The tavern was a resting place for travelers between Yilan and Taipei. When the importance of the trail decreased the tavern lost its purpose. Now only some foundations are left which are pretty much overgrown by nature. Most notable is a stone fence covered in moss standing next to the road. It really gave me the feeling I was walking on an ancient trail.

Arriving at the top there are no trees, they were lost in forest fire a long time ago and the windy tops make them hard to grow back. Now the the area is known for the ‘silver grass’ growing in November. From there the view of the coastline is amazing and looking down I could see the beaches and Dali town from where the hike started. On the ocean I could see fishing ships fishing and in the far distance turtle island.

Taoyuan valley (and amazing view)
I decided there was enough time to take a small detour and instead of following the Caoling trail inland I followed a path into Taoyuan valley, Taoyuan valley is the grass-covered slopeland which stretches about 3 kilometer and offers 360-degree views for a small bit in search for even more better views.

This path followed the top of the hills on the coastline, with viewing (resting) points every once in a while. Looking behind me I could see the maintenance road and in between the trail I had taken.

The view was just amazing. I could really look at every direction around me. See the ocean, looking down I saw the coastline railway but also at the other side I could see Fulong and the Fulong beach.

I went one more viewing stop further so I could have a view of the other side of the hill towards the coastline. Above me Taiwan Eagles were flying, I managed to capture one on camera! Even I started very early a group of Locals already beat me to the top. They were very kind and asked me where I was from and gave me some fruit and nuts to eat on the way back. I took a rest and enjoyed the view before heading back to the Caoling Trail.

Arriving back at the Caoling Historic Trail I continued my way down. The first thing on the left was the Tiger Rock.

A chinese saying states “Clouds obey the dragon, winds obey the tiger.” According to legend, when commander Liu Ming-deng was visiting Kavalan during the Tongzhi period of the Qing Dynasty he encountered a storm at this location in. He ordered to write the character of “tiger” into this stone so the winds would pass.

The caoling trail went downhill on the other side of the mountain and went back into the forest again.

Luckily this time of year there weren’t to much spiders, I only saw one or two small ones. By now it was around lunch time and more people were walking the trail as it continued along a small creek. I was happy walking in the shade of the trees.

Boldy Quell The wild mists, these are the four chinese characters which were inscribed on this big rock by Taiwan Regional Commander Liu Ming-deng in 1867. He was traveling to Yilan on this trail when he encountered stinging rain and thick mist. This made him conscious of the difficulties faced by early settlers of Taiwan building this road so he made this inscription on this Rock at the flank of the Caoling Mountain.

At some places the cold water of the creek was enjoyed by the locals for resting their feet or sitting on the rocks next to it eating their lunch.

The forest trail ended at the Yuanwangkeng Riverside Park. I used googlemaps and followed the road hoping to find a bus station but ended up walking on a bicycle lane next to a highway until I arrived at Fulong, luckily there was not much traffic. In hindsight maybe I should have taken the smaller hill roads instead (approx. 45min walk)

Map of the hiking path: