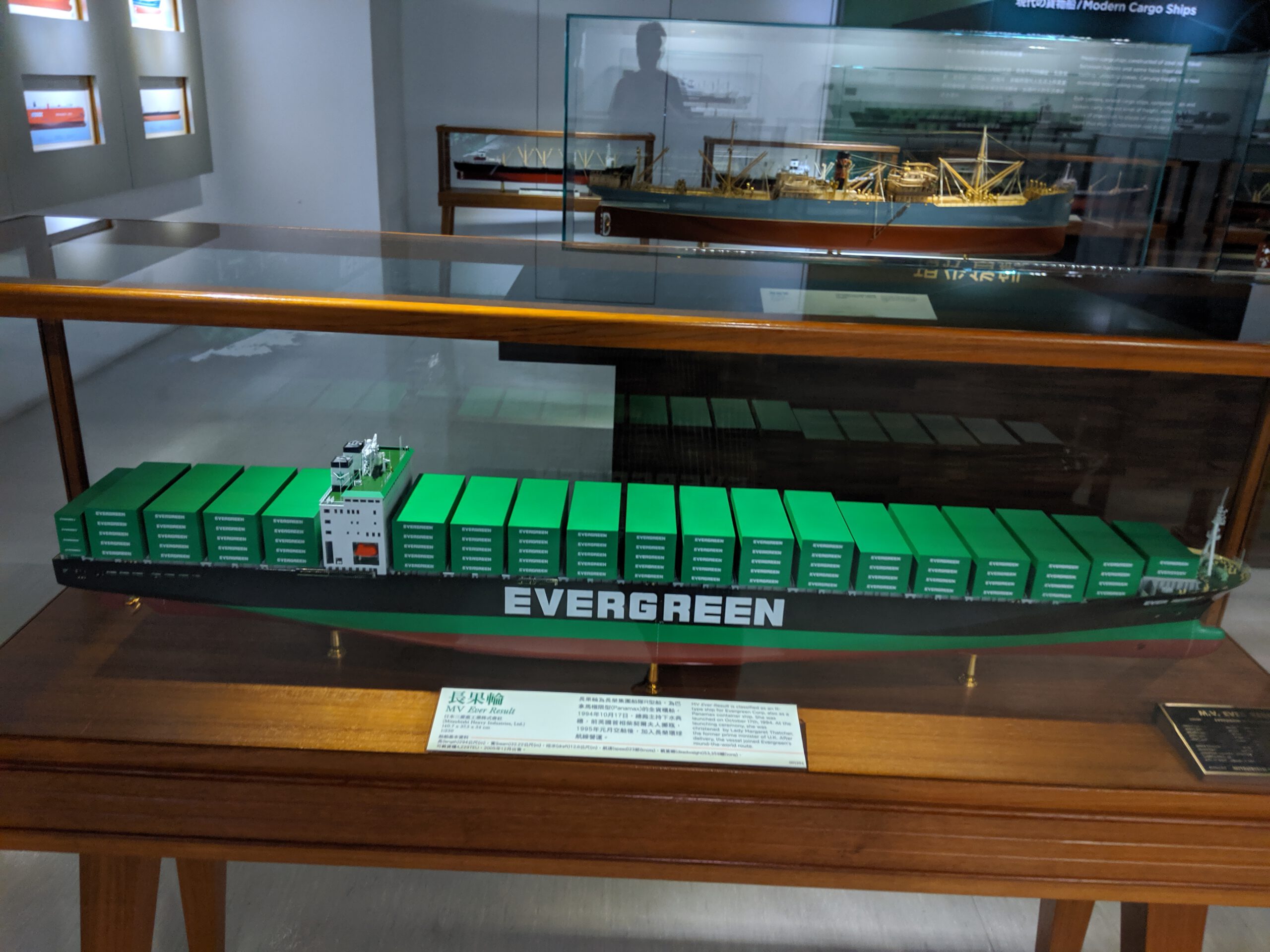 Vandaag wil ik het hebben over het Evergreen Maritiem Museum. You might not know this museum but I think most of you might have seen a green container somewhere with the name Evergreen on the side. Evergreen is de laatste tijd in het nieuws geweest vanwege het containerschip dat het Suez kanaal een tijdje blokkeerde. het So what is it about? Should you visit this museum? Bij deze mijn ervaring van Evergreen maritiem museum, Taipei.

Quick answer: is it worth visiting the Evergreen Maritime Museum?
In short, yes, the museum has quite a big collection of scale models. I also feel that the collection is quite ‘complete’. It tells the story of ships from ancient times until modern age and at the same time also shows the history of the Evergreen company in a fun and interesting way.

So what is the Evergreen Marine company?
Evergreen Marine Corp is founded in 1968 by  Dr. Yung-Fa Chang. Back then the company started with one ship sailing from Taiwan. Slowly the company grew and Dr. Chang quickly realized the future of transport was in container shipping. As of now (2020) Evergreen has a fleet of 160 ships and a shipping network which covers 114 countries.

Where is Evergreen Maritime museum?
The Museum is located next to the Chiang Kai-Shek memorial hall area. The entrance is easily visible.

Is Evergreen Maritime museum busy?
I noticed was that it was very quiet in the Museum. Only me, staff and one or other person were visiting. I think it has something to do with the price of the museum. It is a private museum and cost $200NTD, which is considerately more expensive than the public museums ($20NTD).

Review of the Evergreen maritime Museum
The entrance hall of the Evergreen Museum is quite impressive. In the middle of the Hall a real sized Asian style ship is placed. Alongside on the 2nd floor flags of countries all over the world are placed.

Also a scale model of a ship used by a Chinese emperor to sail down the river is shown.

The museum has 5 floors each having its own topic to exhibit. I went to the 5th floor and moved down from there.

On the 5th floor the history of shipbuilding is presented. It exhibits primitive model ships as well as ships of ancient china.

Historical accurate model ships of Europe style ships are shown too. It contains model ships of the Viking Era, many types of sailing ships from the European Discovery era until the steam powered era. Among the models are viking ships, Koch, caravel, carrack, barque, clipper and schooner models.

The Museum is Founded by the Evergreen company so obvious they will also show the history of their company. On the 4th floor they start off by showing model ships starting from the industrial age (London, 1800s). and slowly build up the until the modern age container ships of Evergreen company.

Quite impressive is the collection of ocean Liner models. They are quite big and made very detailed. To make the collection complete even a piece of Memorabilia Salvaged from the Titanic wreck is displayed: A piece of wood on which a final goodbye is carved.

A section of this floor is dedicated to scale models of their Evergreen freighters from the 70’s until now. It is quite interesting to see how the freighters grow bigger over time…in present day the size of the container ships are quite impressive. The models of the ships are quite detailed and I must say that the museum has quite a ‘complete’ collection.

After that another section is dedicated to WWII war ships. The most impressive being the Japanese warship Yamamoto but also they have a model of a Japanese “submarine aircraft carrier” and some British and American warships.

The 3rd floor is dedicated to paintings dedicated to Maritime. From naval battles to harbor scenes and ships sailing at sea (Among them a lot of Dutch paintings). The paintings are of high quality and I felt fun to look at them. They even had a model of the Dutch town of Hoorn next to the paintings! The 2nd floor was dedicated to Taiwan and Maritime history of Taiwan. And finally the 1st floor had some navigation technologies displayed as well as a ‘wheelhouse ‘ for children to play with and test their skills of being a captain.

Is it worth visiting the Evergreen Maritime Museum?
The museum has quite a big collection of scale models. I also feel that the collection is quite ‘complete’. It tells the story of ships from ancient times until modern age and at the same time also shows the history of the Evergreen company in a fun and interesting way. It is good that Evergreen company has founded this museum and wants to make future generations enthusiastic about Marine. If you are interested in this topic I would recommend Museum, especially if you live in Taiwan. Its nice and quiet and the staff is very friendly.

For me personally coming from Europe the museum wouldn’t be on top of my list, the main reason being that in Europe there already are some very good museum displaying historical ships and Marine paintings also there are so many good other museums and places to visit in Taipei. However I did enjoy the Asian marine history very much including the WWII model ships (in Europe mostly the British and American WWII ships are showcased). I still had a good time so If you are interested in Marine history the museum is just around the corner to the Chiang Kai-Shek Memorial Hall. It is well worth it, even if you are just looking for a quiet place with some air-conditioning in the middle of a hot summer day.

Thank you very much for reading this Article

Bonus material: For people who are interested I have gathered some interesting links about Evergreen marine company:
If you want to see an evergreen freighter for real. You can visit the website shipmentlink.com. Here you can find of each freighter its traveling route and the dates at which it is planned to arrive in each port. I found this route of a freighter traveling from Kaohsiung to Rotterdam. Quite cool don’t you think?

History of the founder of Evergreen company

What is the history of evergreen shipping company?
If you want to read more about the history of the company click on the link below. The website is written in Chinese but you can use google to translate it.

Is evergreen shipping company environmental friendly?
Evergreen strive to make shipping of goods have as less impact on the environment as possible. It has different types of freighters in use, among them S-,L-, B- and F-type ships. Click on the link below to open a webpage where Evergreen company explains how they try to be as environmentally friendly as possible as well as gives detail information about their freighters.